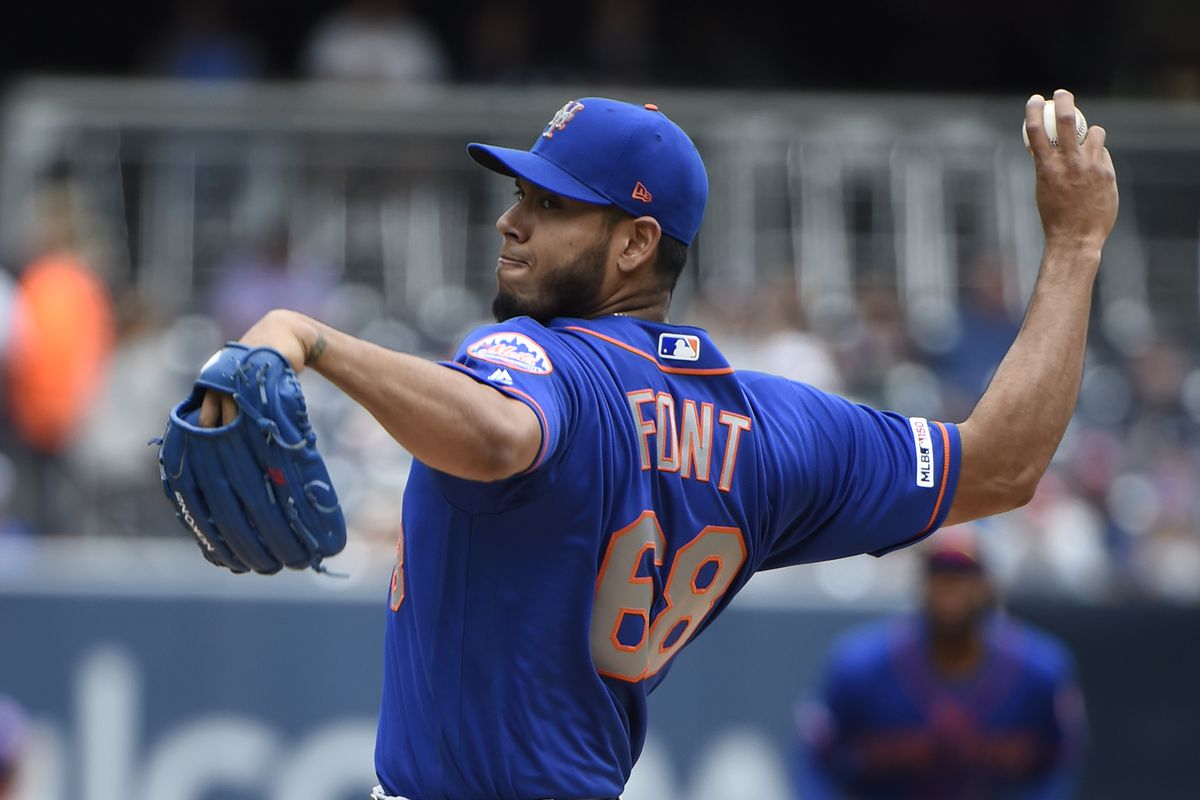 And then Tuesday night happened. In one-third of an inning during the Mets’ 7-5 loss to the Phillies, Wilmer Font allowed two inherited runners and three of his own to score and nearly hit Scott Kingery in the head with a pitch, triggering warnings to both teams, who have already cleared the benches this season.

It was a harsh reminder that Font, 29, has a 6.09 career ERA, and this bullpen is a lot more than a couple of good weeks from a journeyman swingman away from turning itself around. Mets relievers have a 5.48 ERA this year, 28th in the majors. In June, that mark is 7.44.

I’m not hip to everyone who might’ve been available at the time, but I’m 99.9% sure that the GM across the river, Brian Cashman, wouldn’t have acquired a guy with a lifetime 6-plus ERA to ‘help’ his beleaguered bullpen.

I just don’t see any turnaround to this team. They’re 5 games under .500 as I write this and 9 games out of first place. The bullpen for the most part sucks. Why Robinson Cano is hitting No. 3 in the lineup while batting .230 is beyond reason. Cespedes gets into a freak accident and is done for the season. Dominic Smith is coming back down to earth. The starting pitching is maddeningly inconsistent. And if they’re going to be sellers soon, they might as well try to get the best trade possible for Zack Wheeler. That said, Sunday’s incident with Mickey Callaway and Jason Vargas just highlights, once again, the bleak attitude that this team has dealt with for 30-plus years. And since ownership and the new GM aren’t going anywhere soon, why not just let Mickey finish the season, fire him afterwards and hire Joe Girardi.

Remember, the Mets were seriously thinking about leaving Alonso in minors before Opening Day. Now Alonso is on a pace to hit 54 HR’s this season.

Nice series win over the Rockies. But if the Mets are serious about winning this year, it’s time we win more series, get above .500 and make a real run at winning the division. So a split of this brief Yankees series won’t be enough, let’s win two.

I’m only kidding. Jacob deGrom is still our ace. But damn if, with a beleaguered bullpen, that complete game shutout wasn’t absolutely needed last night.

Mickey Callaway referred to the rotation as the Mets strength yet again before Tuesday night’s series opener against the Giants, and he indicated how important it was for the starters to get on a roll of excellence to carry the team.

A few hours later, Noah Syndergaard was on an excellent roll and the Mets manager was removing him from the game, the latest evidence that even nearly 1 ¹/₂ years into the job, Callaway still has trouble making decisions under stress. You know who agrees with that assessment?

Because after what turned into a 9-3, 10-inning loss, Callaway first gathered his players to express in Syndergaard’s word “remorse” about the decision while taking responsibility for the loss and then publicly conceding, “I’d like to have that [decision] back.”

That might be true about the Wilpons and Brodie Van Wagenen when it comes to their choice to stick with Callaway as manager. Three days after removing Jacob deGrom over the ace’s objections and going to a sketchy bullpen that would end up blowing the game, Callaway did the same Tuesday with Syndergaard with the same results. This is the Robinson-Cano-not-running-out-balls-twice of managing. Once, you are not crazy about it, but the second time reaches inexcusable.

Honestly, while I was surprised when Callaway came out to pull Syndergaard last night, I thought that with Lugo having pitched so well of late, we’d be ok. Well, not only was I wrong, but with Gary Cohen reminding us that the Giants one strong point was their bullpen, I just knew that the Mets were likely going to lose. What’s also disturbing tho is Callaway’s lack of being aware in the moment and that’s the biggest reason to ax him.

Familia’s a head case right now and his inability to pitch 1-2-3 innings and constantly get himself in and out of trouble has grown tiresome and is costing the team. Plus, the set-up role is too important to take for granted, esp. while the team struggles. I say put Robert Gsellman there. Gsellman doesn’t care how he’s used and he’s better than Familia at getting strikeouts.