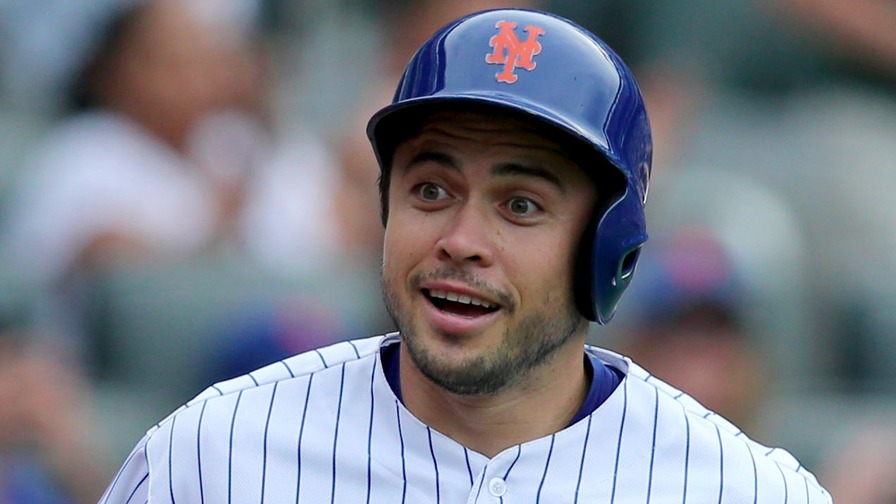 The New York Mets designated Travis d’Arnaud for assignment Sunday, one day after the slumping catcher was booed repeatedly by fans at Citi Field.

D’Arnaud missed most of last season because of an elbow injury that required Tommy John surgery. He had gotten off to a slow start this season, with only two hits in his first 23 at-bats.

The Mets announced the roster move before Sunday’s game against the Milwaukee Brewers. Catcher Tomas Nido was recalled from Triple-A Syracuse in a corresponding move.

Mets fans booed d’Arnaud before his first-at bat in the second inning and again after he struck out in the fourth inning of Saturday’s 8-6 loss to the Brewers.

A rough night got worse three innings later, when d’Arnaud was thrown out trying to stretch a single into a double, drawing more boos.

I’ve said this before. It was a huge mistake for the Mets to let Devin Mesaraco go this past off-season. Huge. Mesaraco was great with Jacob deGrom last year, could hit with power and wasn’t a defensive liability behind the plate. Instead they went with the injury-prone d’Arnaud, degrom is now struggling mightily and now d’Arnaud is gone. SMH.

Maybe the Mets should have done another rain dance.

Intent on playing Friday’s series opener against the Milwaukee Brewers at Citi Field and pitching ace Jacob deGrom, they had to live with the results after a rain delay that lasted nearly three hours. And the results weren’t pretty.

The reigning NL Cy Young Award winner blew up for five earned runs in the third, giving up more in one inning than he did any singular outing last season, and the Mets were blown out yet again 10-2. It was deGrom’s third straight loss.

“My arm feels great, that’s what’s really frustrating about it,” he said. “It felt good warming up, it felt really good in the bullpen out there so to go out there and do that, that’s embarrassing.”

You can’t go from just winning a Cy Young to be being this bad so soon, can you?

RELATED: Where Are They Now? Turk Wendell

At 34 seconds long, the trot was not only cool to watch, but it was the perfect troll after almost getting hit twice against by Jacob Rhame the previous night. Let’s just hope that with Major League baseball’s obsession with pace pf play, the powers-that-be don’t come up with some stupid rule that regulates the home-run trot.

On a day the Mets trot out Jason Vargas to the mound, a potential replacement fades away.

Gio Gonzalez is signing a one-year, $2 million deal with the Brewers, The Athletic first reported Wednesday. It’s a major league deal that also includes performance bonuses. It’ll be a reunion for the free-agent starter, who came to Milwaukee in a deadline deal from Washington last offseason.

Milwaukee reportedly was more attractive than other suitors because he can slot right into the rotation, whereas the Mets may have wanted him out of the bullpen, too.

The Mets, according to The Post’s Mike Puma, viewed Gonzalez as a marginal upgrade at best over Vargas. They did not want to eat his money if he flopped.

My guess is that with the Mets in first 1st place and deGrom’s MRI coming back ok, there just isn’t a pressing need to sign a starting pitcher.

Amed Rosario has five errors in his past five games, but the Mets shortstop shouldn’t expect a day off anytime soon.

“We don’t have another shortstop, so he’s not getting a day,” manager Mickey Callaway said after the Mets fell to the Cardinals 6-4 Sunday at Busch Stadium. “No, he’s fine.”

Rosario’s first of two fielding errors Sunday was the more costly. It came on a weak ground ball from Cardinals pitcher Dakota Hudson in the bottom of the second as Rosario couldn’t field it cleanly, loading the bases with one out in a 1-1 game. Two batters later, Paul Goldschmidt cracked a two-run single and the Cardinals led the rest of the way.

I assume that this is why we picked up Jed Lowrie in the off-season, but he’s still on the DL. I’m also of the feeling that Rosario’s errors contributed heavily to Steven Matz’s horrible last start where the Phillies scored 10 runs in the first. If Rosario’s fielding woes continue, the Mets will really be in trouble.

Mets right-hander Jacob deGrom says his elbow felt better Saturday, one day after the team had said he would return to New York for an MRI.

Manager Mickey Callaway said deGrom now may not need to have the MRI, but will be checked out by the team’s medical staff when the Mets return to New York on Monday.

On Friday, the Mets said the reigning Cy Young Award winner would be placed on the 10-day injured list, retroactive to Tuesday. DeGrom was scratched from his Saturday start against the Cardinals.

“It’s just a little sore,” deGrom said in St. Louis after throwing in the outfield.

I mean, why take any risks? Just get an MRI to be on the safe side. You can’t be a Mets fan and not want Dallas Keuchel on your team instead of the anemic Jason Vargas. That being said, Vargas has only had two starts this season, one of which was against the defending NL-East champion Braves (in which he was horrible) and a quality start against the Marlins in which he gave up 2 runs in 5 innings. Vargas also pitched an inning in relief against the Twins that saw him also stink up the joint by allowing 4 runs. That’s 3 outings altogether, 6.1 innings, a 1-0 W-L record and a 14.21 ERA. Yeah, Vargas has for the most part been incredibly bad, but the Mets went into this season hoping that Vargas would continue pitching to the promise he displayed in the 2nd half of last year. So they’re not going to give on him after only 3 outings, no matter what free agent is still out there. It also helps Vargas’ case that the team has gotten off to a nice start to the new season, being only a half-game out of 1st place. Then too, it took 8 outings and 4 bad starts for the Mets to give up on Matt Harvey last year. I think it’s only fair that Vargas, unless the team goes on a major losing streak, gets the same opportunity.

As for Vargas’ appearance in this now infamous interview that took place after the Braves loss…I got him looking like Jerry Springer than anyone else.

From what I’ve read and heard, Kimbrel only wants to be a closer so that’s a no-go. On the other hand Keuchel as a replacement to Vargas is a no-brainer.

Alyssa Rose chats with Pete Alonso about his first week in the majors, his nickname, funniest teammate and more.

Score one for Team Dykstra.

Wally Backman became the latest former Met to chime in on the feud between Lenny Dykstra and Ron Darling over whether Dykstra shouted racial slurs at Red Sox pitcher Oil Can Boyd from the on-deck circle during the 1986 World Series, as Darling claims he did.

Dykstra has vehemently denied the allegation while former teammates Darryl Strawberry, Dwight Gooden and Kevin Mitchell, along with Boyd, have all said they did not hear his comments. Keith Hernandez, meanwhile, said he saw Dykstra “barking” at Boyd, but did not hear the alleged insults.

“The fact of the matter is I [was] standing right besides Lenny on the on-deck circle before that game,” said Backman, the former minor-league Mets manager now in charge of the Long Island Ducks. “If something like that would have happened, if something would have been said, I would have said something to him at that time. But I’ve known Lenny a long time and I know for a fact — on my kids’ life — he did not say that.”

The evidence on both sides has been weighed and I think it’s pretty clear on who the winner is. Darling should apologize and admit he got it wrong.

Dallas Keuchel remains a free agent over a week into the regular season, and now his contract demands are emerging.

One executive spoke to Ken Rosenthal of FOX Sports, and he’s under the impression the left-hander is seeking a one-year contract for more than the $17.9-million qualifying offer Keuchel rejected from the Houston Astros, or he’ll take a long-term deal at a lower salary.

It’s not clear if any team is offering him either of those options, according to Rosenthal.

Keuchel’s already difficult free-agent journey has become even harder now that the season is in progress. Any deal he signs for the 2019 campaign would now be prorated based on when the veteran makes his regular-season debut.

Keuchel’s won a Cy Young and Jason Vargas can’t seem to be trusted to go longer than 5 innings. If it’s really just for a year, why not pay the man the money?